Son Ye Jin is reliving her character Yoon Se Ri in the smash-hit Korean drama “Crash Landing on You” as she graces W Korea.

The 39-year-old actress looked like an heiress with her captivating beauty during the campaign shoot for the publication’s June issue.

Over W Korea’s official website, the award-winning actress showed off her modeling skills as she dons in a beige longline trench coat paired with rockstud slingback shoes and handbag, all from Valentino.

Meanwhile, she kept it classy with sleek hair and a bold red lip that exudes a girl boss vibe.

In another photo, Son Ye Ji posed with a fierce look as she gazed straight at the camera.

She wore an elegant black ensemble with a white-collar point top paired with dark trousers and a rockstud alcove double handbag from the Italian luxury fashion house.

To recall, the high-end brand tapped the South Korean actress as one of their brand ambassadors.

In March, the “Something in the Rain” star appeared, alongside Japanese model Kōki, and Chinese actress Guan Xiaotong to be the face of Valentino’s DI.VAs campaign.

Aside from being one of the most sought-after actresses of her generation, the 39-year-old A-lister is also among the country’s fashion icons that exhibit grace and class, which made her the perfect actress for the “Crash Landing on You.”

Speaking of the popular romance drama, this is also where she met her on-screen turned real-life partner Hyun Bin, who is her leading man in the top rating tvN series. 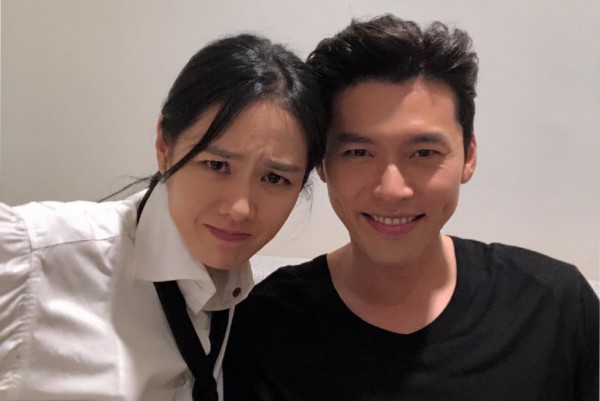 Earlier in 2019, the broadcast network confirmed that the two will lead the now mega hit “Crash Landing on You” alongside Seo Ji Hye and Kim Jung Hyun.

During the script reading, Hyun Bin did an interview where he mentioned how thrilled he is working together with Son Ye Jin.

To recall, this is not the first time that the duo appeared in the same project.

Surprisingly, the actress made a cameo in Hyun Bin’s drama “Secret Garden” and led the cast of the 2018 movie “The Negotiation.”

Following the success of their 2020 drama, also known as “CLOY,” a South Korean outlet, Dispatch revealed that the 38-year-old actor and So Ye Jin are dating in real life.

This was also confirmed by their respective talent agencies, saying that they “developed an interest in each other and ended up dating.”

Surprisingly, the actress welcomed the year with a bang as she expressed her gratitude towards the fans and to her special someone.

“I’m thankful to have been able to meet a good person, and I’ll work hard to tend [the relationship] with care,” Son Ye Jin Instagram caption reads, alongside a photo of a lovely pink and red bouquet that appears to be given by Hyun Bin.